While in Campbeltown, we decide to go to Gigha for a day. We take our folding bikes and catch the bus to Tayinloan, about 12 miles away. We arrive at 0900 and discover that we have one minute to get to the ferry about half a mile away. Hoping that it might be a little bit late, we assemble the bikes and pedal madly down the small road leading down to the ferry slip. The ferry is still there and nothing much seems to be happening, so perhaps we are in luck. We round the corner, and sprint the last 100 metres or so, but just as we arrive at the carpark, the ferry leaves. I am sure they saw us. One might have thought that in this age of joined-up thinking that they could have matched the bus and ferry times a little bit better. 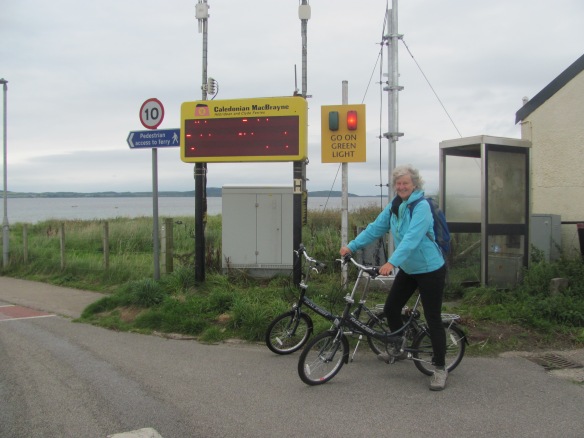 We have an hour to wait. Oh well, a nice coffee at the little café will do the trick. We push the bikes over, licking our lips in anticipation.

The café is closed and opens at 1000 just when the next ferry goes. It’s not our day. There is nothing to do but stand in the cold wind trying to amuse ourselves. I read the timetable three times, but it doesn’t change. Eventually the ferry returns, we board, and cross to Gigha. 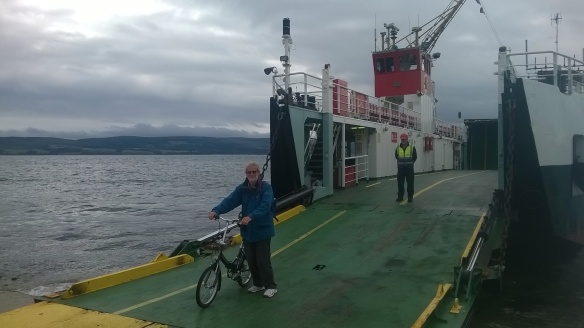 Last one off is a rotten egg!

Near the ferry slip is the Boathouse restaurant, which is open at least, so we stop and have a coffee and check the bikes while we are at it. The seat clamp on mine is not holding, letting the seat slide down, so I adjust it as tightly as I can. 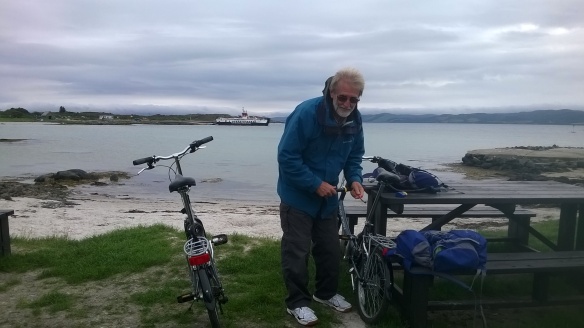 We set off heading for the south of the island. The seat on my bicycle lasts about five minutes before it is down again. We stop, and I try and tighten up the tensioning bolt, but it is just not holding. An elderly gentleman in his front garden sees our predicament and comes over to see what the problem is. I explain.

“Och, what you need is a bit of tape just to make it a bit tighter”, he says, disappearing into his house and returning with some red electrical insulating tape. “Let me put this on for you”.

It’s worth a try, so I let him. It seems to do the trick. The First Mate asks him how long he has lived on the island.

“Och, I have been here for nearly 50 years”, he answers, “I came over to work as a plumber for Sir James Horlick in 1970, and never left. But I am still considered an outsider, you know. You have to be born here to be a true islander.”

“Wow”, says the First Mate, clearly impressed. “What was it like living here when Horlick owned it?”

“Ah, he was very strict, and it was tough for the people who were living here – they weren’t even allowed to be buried on the island”, he responds. There is a twinkle in his eye, but I can’t work out why.

“Oooh, that’s terrible”, says the First Mate, trying to imagine coffins being loaded onto the ferry. “Why on earth not?”

“Because they were still living”, he answers, slapping his knees and guffawing with laughter. “You wouldn’t want to bury living people, would you?”

We laugh with him – as jokes go, it’s not bad. The old ones are the best ones. Joke-tellers, that is.

We continue on our way, heading for South Pier at the tip of the island. Five minutes later, and the seat is down again. The tape has made no difference at all. I decide to put up with it. 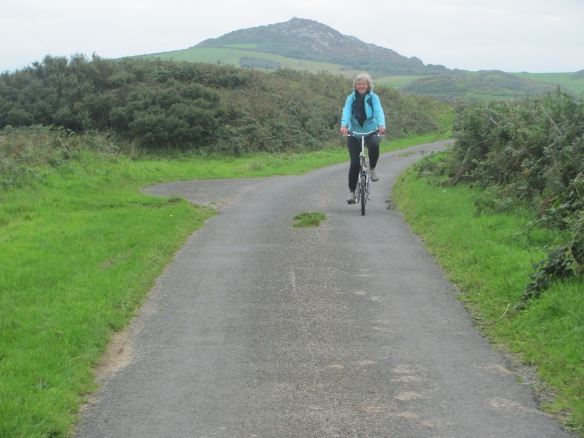 Off to our right, we pass the Gigha windfarm. The turbines are known as the Dancing Ladies and apparently are called Faith, Hope and Charity, although as there are four of them, someone seems to have slipped up on the maths. They were commissioned in 2005, and produce enough electricity to supply the houses on the island as well as exporting any excess to the national grid and earning income. Apparently they paid for themselves within five years.

We continue to South Pier, where a team is carrying out the annual check on the pier itself. A woman from the local council is in charge of four divers who are preparing their gear to go underwater and examine the piles. She tells us that she is of Portuguese origin from Mozambique. We wonder why she has ended up in such a place so far away from home.

“Marriage”, she says. “When we left Mozambique, my husband got a job for the local council in Belfast in Northern Ireland. This was the closest job I could get.” We stare across the North Channel through the haze to Northern Ireland and think to ourselves that they are both in Dalriada at least. 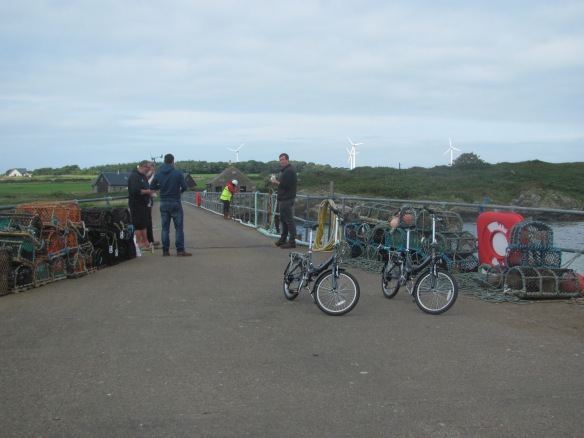 Annual check up of South Pier.

We return along the same way that we came and take and entrance to our left to enter Achamore House and gardens. A winding driveway eventually ends at the House. We meet an elderly couple walking out who tell us that the current owners are moving away and the house itself is a bit of a mess with everything in boxes ready to go. It is, however, possible to visit the gardens, including the walled garden behind the house. 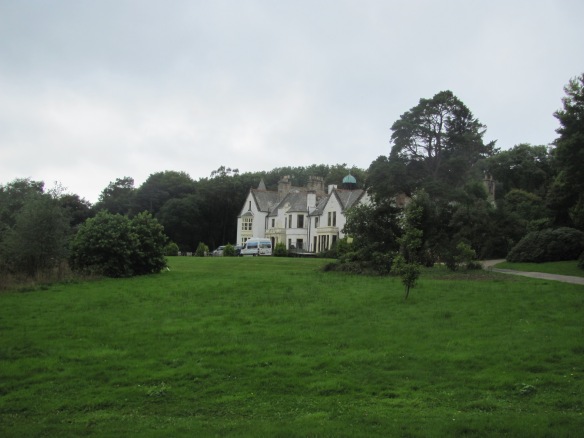 The gardens are now owned and maintained by the National Trust as part of a community buyout of the island. We push the bikes up the track at the side of the house and explore the walled garden behind. Two peacocks eye us suspiciously and continue preening themselves. 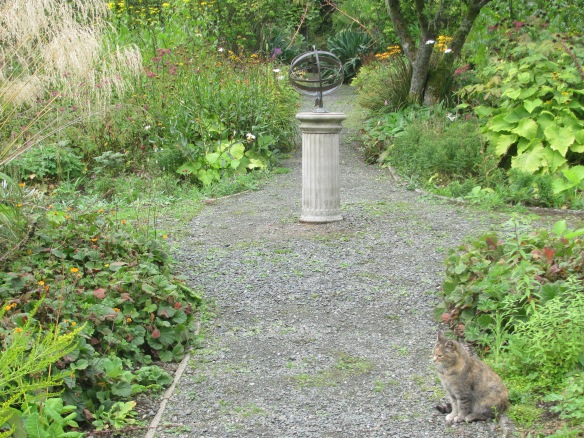 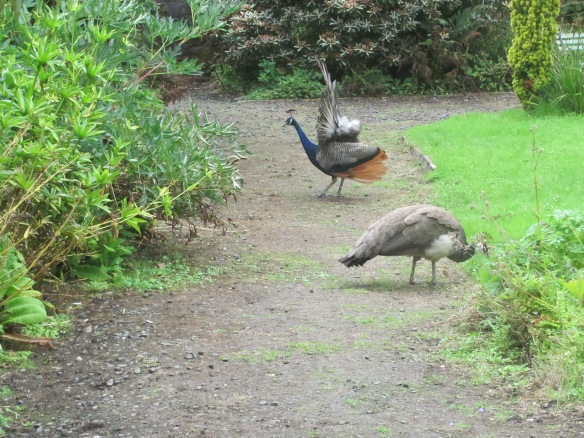 We climb the short path behind the gardens and find the spectacular viewpoint out over the western side of the island and over to Islay. 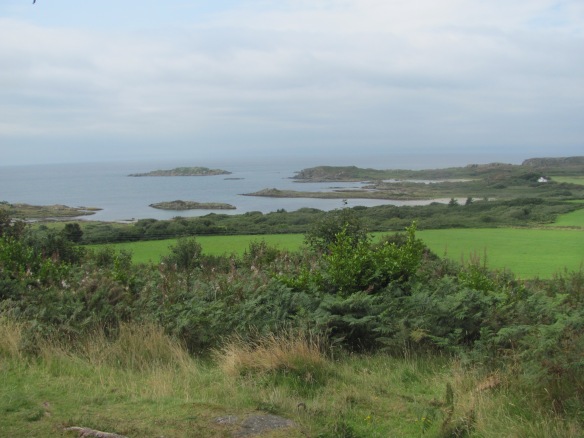 Further on, we pass the ruins of Kilchattan church established by St Catan, an Irish missionary who came to Argyll to preach Christianity in the 6th century. As we wandered between the stones in the graveyard and inside the church itself overlooking the Sound of Gigha, I wonder what motivated these missionaries to give up what they had at home and come to a strange land and strange people, all in the name of a set of beliefs. What gave them such strong conviction that these beliefs were right and needed spreading? It must be nice to be so certain about something. 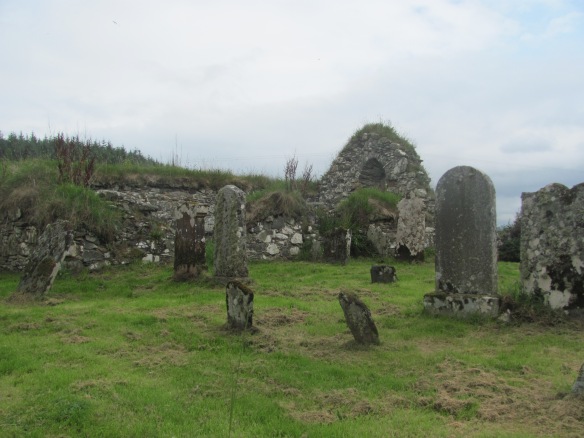 We make our way back to the Boathouse for our lunch. It is packed out, so we are glad that we made a reservation earlier. 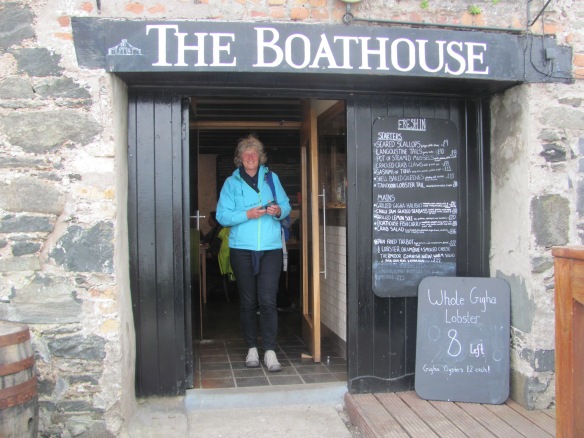 Lunch at the Boathouse, Gigha.

We are given a table underneath an antique diving helmet. I feel that it is watching our every move, and try and sit still and talk without my lips moving. It may be my imagination, but the helmet seems to move closer as if to hear better. 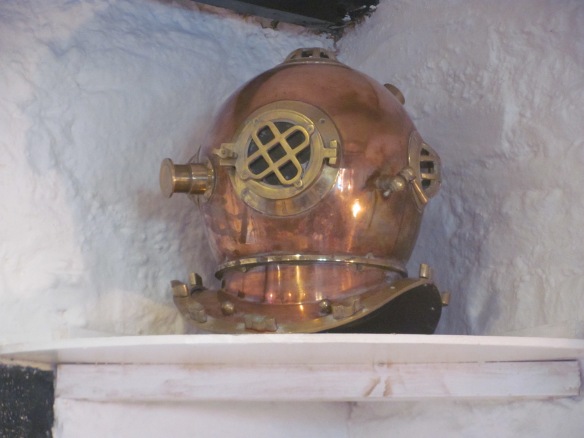 We decide to splash out and order grilled Gigha halibut with avocado, apple, radish, chilli and orange crispy pancetta, and walnut arancini. We feel slightly guilty for eating so much at lunchtime, but it is excellent and we convince ourselves that we deserve it after all the cycling we have done. The helmet rocks in agreement. I feel like telling it to mind its own business. 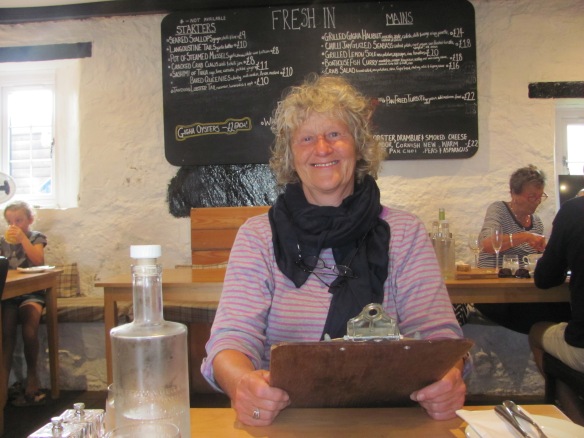 Working out what to have for lunch.

To work it off, we continue our ride to the north of the island as far at the Carragh an Tairbeirt, or the Stone of Tarbert, shaped like a hand emerging from the earth. Other names include the Druid’s Stone and the Giant’s Tooth. Nobody knows quite what it was built for, but one theory is that it may have been some kind of lunar observatory. We look at it and wonder what secrets it holds. 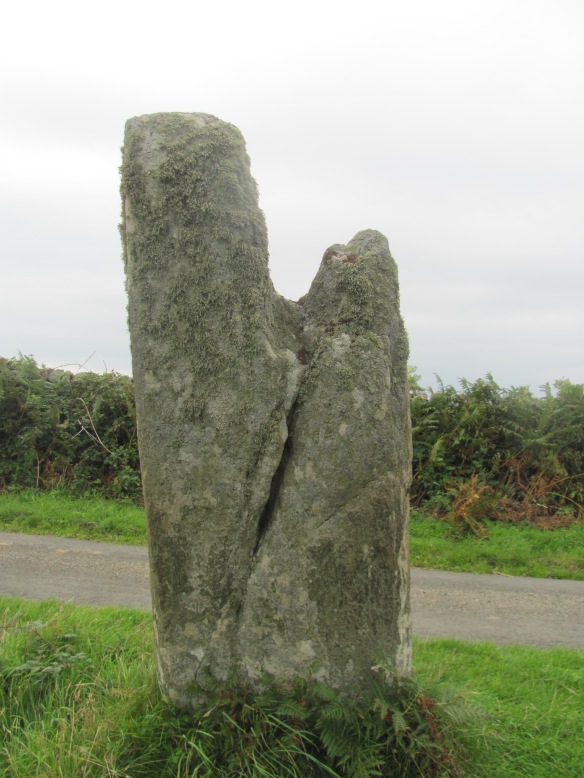 We suddenly realise that the ferry is due to leave soon, which we must get if we are to catch the last bus back to Campbeltown, so we pedal furiously back to the slipway, arriving just as the ferry pulls in. 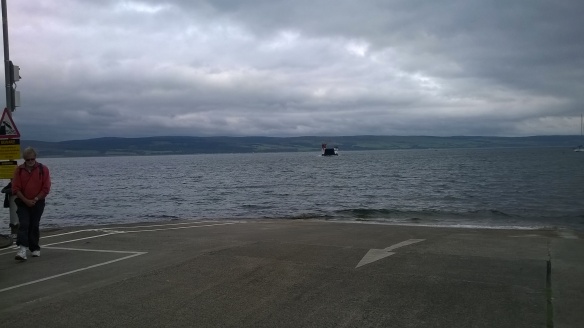 A fascinating island, and we resolve to go back some day.

This site uses Akismet to reduce spam. Learn how your comment data is processed.